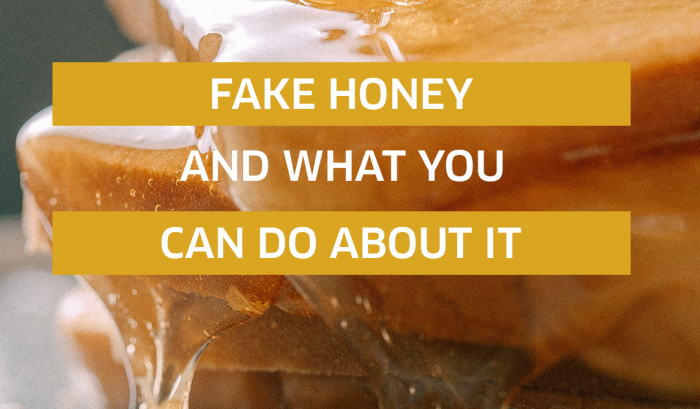 Honey adulteration is a major issue and the fight against fake honey will be a long and arduous one, but let’s start at the beginning.

How is commercial honey produced?

Honey bees and a few other related insects are responsible for making the sweet, viscous food substance that is mostly produced by secretions, regurgitation, enzymatic activity, and water evaporation. The sweetness of honey comes from the appropriate sucrose, fructose, and glucose levels that may be present.The production of the honey begins with a long process. The first step involves the gathering of nectar and honeydew by the bees. The collection of nectar gets done by sucking it through the Proboscis (long needle-like mouth), and the nectar gets placed in the Proventricular (‘honey stomach’ that lies dorsal to the stomach). The water content of the nectar is raised slightly by the salivary enzymes which eventually break down the nectar into sugars.

After returning to the hive, the bees collecting the nectar transfer the nectar to bees in the hive. These bees ingest the nectar and place it in their Proventricular. They regurgitate the nectar repeatedly and let it partially digest with the formation of bubbles. The large portion of water in the nectar gets removed through evaporation. This large surface area per volume gets made from the bubbles. Enzymes in the bees hydrolyze sucrose into glucose and fructose and increase acidity by breaking other starches and proteins.

This whole process takes about 20 minutes and involves the passing of nectar from one bee to the others. The product is left unsealed in honeycomb cells. The fermentation of the stock is prevented by the fluttering wings of bees, which keeps the air circulation and water evaporating. The product sealed by bees through the wax completes the process. The beekeeper then takes these honeycombs out and separates the honey.

What is “Fake Honey”

The honey industry has long been plagued by adulteration. Although most honey produced in the United States is authentic, the issues arise when honey is imported from other locations. Adulterated “honey” is cheaper to use and often loaded with syrups that are potentially dangerous. Beekeepers are often severely undercut by dealers of this adulterated “honey” and the lack of international and standardized governance of honey and bee products amplifies the issue. Some adulterators even go as far as to sell a product that they claim is undetectable by current laboratory methods, such as “isotope proof” syrup in regions of China. Therefore, it is imperative that honey testing laboratories like QSI America, stay on the cutting edge of honey analysis in this never-ending game of cat and mouse.

The How of “Fake Honey”

There are usually two methods by which honey is adulterated: The fight against adulterated honey is a never-ending battle. Some analysis, such as SIRA testing has been successful in catching some attempts to falsify honey but has been deemed unreliable as sophisticated fake honey is often modified to pass through this analysis undetected.

Partnering with a reputable honey testing laboratory is key to ensure that the product you import is pure and unadulterated.

The following methods can be used to detect adulteration in honey:

A Partner in the fight against honey adulteration

At QSI America, we strive to provide our customers with the necessary tools to combat honey adulteration. We specialize in all aspects of adulteration, identification, and purity of honey, agave syrups, and bee products with over 17 years of quality assurance experience. Our proprietary research, methods, and analyses with stem from over 50 years of in-depth knowledge from QSI in Bremen (Germany) have been adopted for QSI America.

We also offer many other necessary services for honey such as: